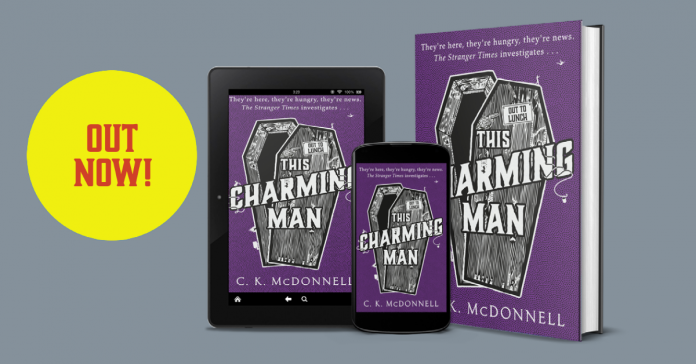 Vampires do not exist. Everyone knows this. So it’s particularly annoying when they start popping up around Manchester . . .

Nobody is pleased about it. Not the Founders, the secret organisation for whom vampires were invented as an allegory, nor the Folk, the magical people hidden in plain sight who only want a quiet life. And definitely not the people of Manchester, because there is nothing more irksome than being murdered by an allegory run amok. Somebody needs to sort this out fast before all Hell really breaks loose – step forward the staff of The Stranger Times.

It’s not like they don’t have enough to be dealing with. Assistant Editor Hannah has come back from getting messily divorced to discover that someone is trying to kidnap a member of their staff and while editor Vincent Banecroft would be delighted to see the back of any of his team, he doesn’t like people touching his stuff – it’s the principle of the thing.

Throw in a precarious plumbing situation, gambling debts, an entirely new way of swearing, and a certain detective inspector with what could be kindly referred to as ‘a lot of baggage’ and it all adds up to another hectic week in the life of the newspaper committed to reporting the truth that nobody else will touch.

Get your hands on a copy

Ordering from outside the UK and Ireland? Order your copy from Blackwell’s for offer free international delivery.

Ordering from outside the UK and Ireland?
Order your copy from Blackwell’s for free international delivery.